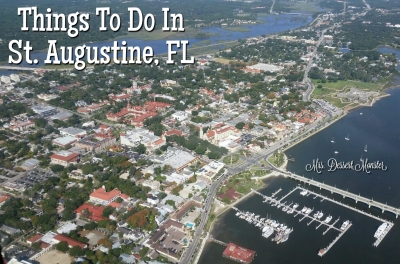 There were several fun things we got to do in our day & a half in St. Augustine. This list is solely based off of our most recent trip; no one is paying me to promote their thing. I just wanted to share what my husband & I enjoyed doing in the oldest city in America. 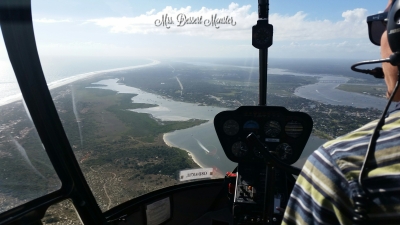 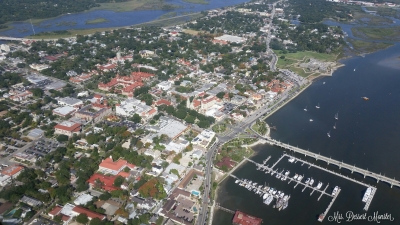 My birthday gift to my husband was a helicopter ride! Old City Helicopters offers a few different packages & routes. I got a good deal on Groupon for the Porpoise Point & Old Downtown tour. It was amazing! My husband was so thrilled. He says it’s the coolest thing he’s ever done. 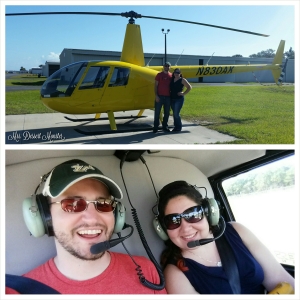 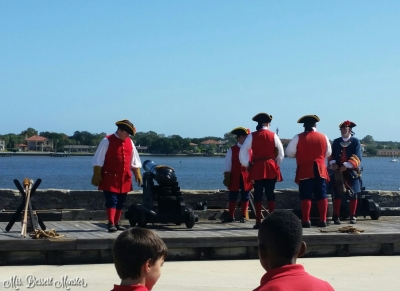 It’s a Florida tradition for 4th grade classes to go on a field trip to St. Augustine (see the two 4th graders in the picture?). I didn’t go on my 4th grade field trip, but I have been to St. Augustine & to this fort before. It’s pretty cool & definitely worth checking out. What we most enjoyed was the canon demonstration they do ever hour. The reenactors portray Spanish soldiers & do the whole thing in Spanish. It’s really neat! I think it’s really interesting how this fort (& the whole city, really) changed hands from the Spanish to the British & then back to the Spanish. The exhibits at Castillo De San Marcos really teach you something! 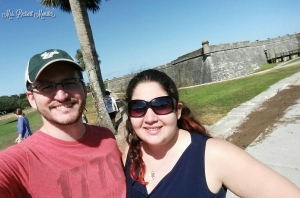 My husband & I didn’t do too much in the historic district on this trip since we’ve both been here before, but it is worth checking out. There are lots of things to check out, such as the oldest wooden schoolhouse. There are also several shops & restaurants, plus it’s a nice walk (the buildings provide some much appreciated shade!)

My husband wanted to go see the old jail, & when we went to buy tickets there was a special price if you purchased both the old jail & the oldest store museum tour. We said sure, why not. I am so glad we did! The oldest store museum was one of my favorite things from the whole trip! It’s a guided tour & the actors are amazing. The first one portrays a ‘snake oil’ salesman & offers all kinds of curios from the early 1900’s. The second actor shows you the storage area where the ‘new shipments’ came in – such as a goat powered washing machine! I want one! We were laughing the whole time, it was a lot of fun!

After we finished the oldest store museum tour, we did the old jail tour. This jail is unique because it’s actually quite pretty from the outside. When the Ponce De Leon hotel was built in flourishing St. Augustine, the local jail was too close for Henry Flagler’s comfort. So he had it moved & insisted that it not look like a jail from the outside. What’s also interesting is that the sheriff’s house was built not only adjacent to the jail – but connected to it! This tour was pretty fun, too, & describes how the jail was run back in the day.

This museum tour isn’t for the faint of heart. The Spanish Military Hospital Museum has all kinds of medical tools & medicines on display from the second Spanish period (late 1700’s to early 1800’s). The tour guide describes in great detail things like taking out bullets, amputating limbs, & removing teeth – all without anesthesia! We thought it was super interesting, but there definitely are some stomach turning moments! The Spanish were way more advanced in medicine than the British & had all kinds of home remedies that Hispanic people still use today! The tour guide was describing how they used things like calendula, lavender, & cloves medicinally & I was like, “oh yes, I know this. My mom taught me!”

Flagler College is a small liberal arts school that was once an extravagant hotel. It’s a fully functioning college campus, but they still offer historical tours. We didn’t do a tour, but we walked inside & marveled at the beautiful architecture & design. I think it’s interesting that St. Augustine has a couple of places that used to be hotels & are now something else – usually it’s the reverse! 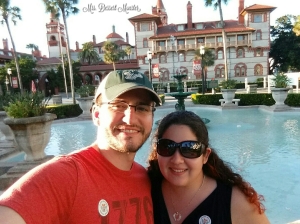 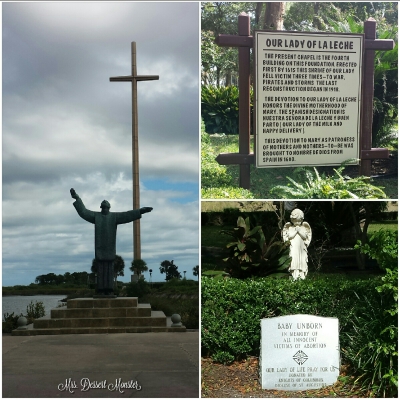 In past trips to St. Augustine I had never even heard of this mission being here, but I am so glad we checked it out this time! This mission goes all the way back to the 1500’s. My husband & I are not Catholic, but the history & reverence at the mission & shrine were really intriguing. This is another location that was used by the Spanish, the British, & then the Spanish again. I find that extremely interesting since the British were not Catholic, but still preserved this area & used it as a holy place themselves. I, personally, really appreciate the emphasis on mothers & the unborn. The mission also has an archaeological excavation program with the University of Florida (go Gators!) as a collaborative project with the Florida Museum of Natural History & other organizations. My husband was most impressed by the old tombs from the 1800s. It is definitely worth taking a stroll through these grounds.

There are many more attractions that we didn’t get to, such as the lighthouse or the Colonial District. We did most of these things on a Friday; Saturday everything was considerably busier!

We ate at some pretty yummy places while we were here!

Burger Buckets: This place has some really incredible burgers! I had the Hawaiian & my husband had the Bite of Fire: pepper sauce, ghost pepper cheese, & jalapeños! Both were really tasty with fries, corn nuggets, & a milkshake on the side. Our lunch gave us all the energy we needed to walk around the rest of the day.

Harry’s: It was my husband’s birthday weekend, so to celebrate we went to Harry’s Friday night. I’ve been to the one in Gainesville before, so I knew my hubby would like it. We took our server’s recommendation & ordered the following (descriptions taken straight from their website): Shrimp & Scallop Orleans -lightly blackened over a crispy grit cake with tasso ham cream sauce and Harry’s collard greens, & Crab Crusted Red Fish Royale – blackened red fish topped with crab meat served with corn maque choux, smashed potatoes and finished with our louisiana beurre blanc. If your mouth isn’t watering, then there’s nothing I can do to help you.

Borrillo’s Pizza & Subs: This place has some really good NY style pizza. The slices are huge & the prices are low!

Luli’s Cupcakes: This bakery is right next to the pizza place, so of course we had to stop in for dessert! They have a very wide selection & do both standard sized & mini cupcakes. We grabbed a couple of mini cupcakes for the road, as well as a frosting shot – which is EXACTLY what it sounds like! What a genius idea! If I ever open a bakery, I want to do something similar!

We had a great time in St. Augustine & we didn’t even get to half of what the city has to offer. I think a repeat trip is definitely in order, perhaps with our own 4th grader some day (if not before then)!