A few weekends ago I had the type of Saturday that only comes around once every couple of months. It was a glorious Saturday with absolutely no plans. It was a no-need-for-pants kind of day.

This is not to be confused with the type of Saturday where you are bored & wishing for plans. This was a much needed break from busy lives. My husband & I did things around the house. We watched college football. We had the whole day to ourselves to do whatever we wanted. After a delicious steak dinner, I realized we did not have any dessert. My husband said, “we haven’t left the house all day – do you want to go out for some frozen yogurt?”

We hadn’t left the house all day! I was not about to put pants on, especially not after dinner. 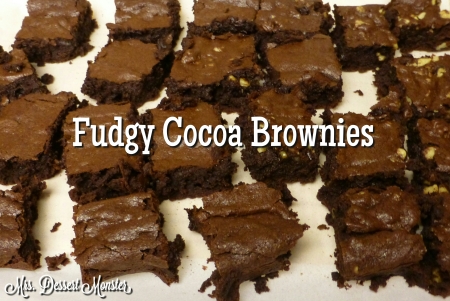 I had actually never made brownies from scratch before. I looked up several recipes & tips before arriving at Epicurious’ Best Cocoa Brownies. According to this recipe, these brownies have a soft center & a nice top crust because of butter & granulated sugar. I looked up the differences between cakey & fudgy brownies. This post from Fine Cooking has great explanations. I had no idea there was such a wide variety of brownie techniques, but I think I found my niche with this recipe. I prefer the fudgy kind.

“Combine the butter, sugar, cocoa, and salt in a medium heatproof bowl and set the bowl in a wide skillet of barely simmering water. Stir from time to time until the butter is melted and the mixture is smooth and hot enough that you want to remove your finger fairly quickly after dipping it in to test. Remove the bowl from the skillet and set aside briefly until the mixture is only warm, not hot.

Stir in the vanilla with a wooden spoon. Add the eggs one at a time, stirring vigorously after each one. When the batter looks thick, shiny, and well blended, add the flour and stir until you cannot see it any longer, then beat vigorously for 40 strokes with the wooden spoon or a rubber spatula.”

I did no such thing.

I know baking is a science, & I mean no disrespect, but ain’t nobody got time for that.

My brownies still turned out amazing.

I didn’t just throw everything in the bowl, I just kind of used previous baking experience with a little common sense to come up with my own steps. Plus my handy dandy KitchenAid mixer. Also, the Epicurious recipe is for an 8 x 8 pan; I doubled it & used a 13 x 9.

The one instruction I did follow properly was lining the bottom and sides of the baking pan with parchment paper, leaving ‘handles’ on two opposite sides. THAT is great advice. 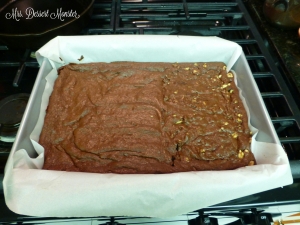 The whole thing came out very easily. This is a great idea so you don’t end up cutting the brownies in the pan. I have ruined a few pans by cutting baked goods in them. 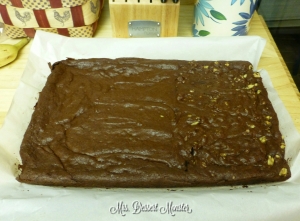 These brownies were so amazingly rich & fudgy. Perfect with a glass of milk.

Walnuts for me, none for my hubby. Compromising can be delicious & fun!

I must make these again.